For years I have had some clear glass bulb ornaments lying around, buried in a box, in hopes that one year I would get creative and make something out of them. Well I finally did it. I used the Knifty Knitter spool loom to create some wreaths, decorated them, and carefully inserted them inside the bulbs! For each one, I used Lion Brand Holiday Homespun green and red, and some wire ribbon I had at home.

For the first one, I inserted the wreath inside the bulb and then knit the ends together once it was inside. 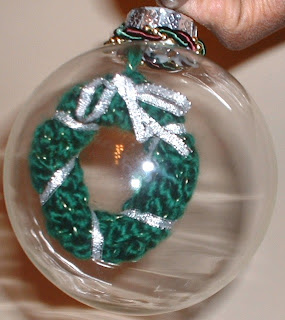 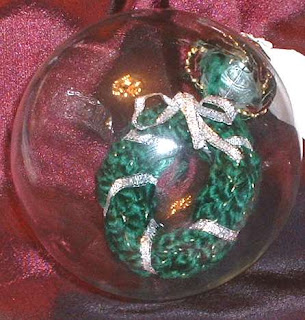 But this was a little bit too tricky to repeat over and over, so for the next ones I just knit them together first, decorated them, and then inserted them inside the bulbs. I don't have a picture of the very first one because these bulbs are hard to photograph, and the picture I took really didn't come out that well.

This one has a small rose on it that I had lying around from some Valentine's project. I didn't make it. 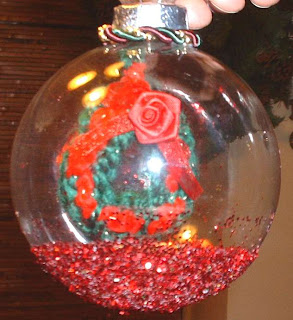 Some of my coworkers saw me knitting and creating these bulbs, and even though they saw how I got them in there, they still marveled at them when they were completed. The people who received them as gifts were amazed and excited by them as well.

But below is my favorite one: the Christmas tree! 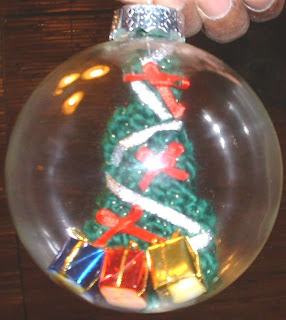 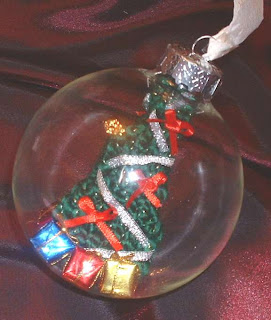 I made a poinsettia a while back, so I just used the same technique that I had learned to make the poinsettia leaves to make the Christmas tree. I already had some miniature Christmas presents among the Christmas decorations at home, so I just used them and glued them and the tree inside the bulb. The tree only took about an hour to make, including decorating both sides. I tied the red ribbons myself! No small feat. But voila! What results! I would still have it if someone hadn’t bought it! Not that I’m mad about THAT! And they loved it. The person's wife said it was too good to hang on the tree, that it was heirloom quality. What a compliment! 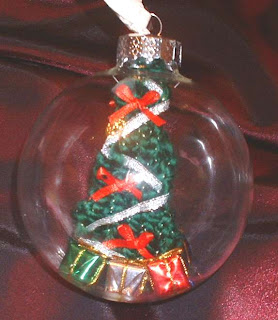