It has been awhile since I created a new coffee can doll (which is a doll that is covering a coffee can), so I figured I’d try my hand at something special for winter. Last year during the holiday season I was watching tv with my daughter and a black and white short reel from the 1950s came on called, Suzie Snowflake. I thought my daughter might be entertained by it, so we watched it. But instead of amusing her, it actually frightened her a bit, so I turned it off. I guess it was a bit much to think that every time it snowed, there was some little person flying around who would come tapping at your window. But it made me think about making a coffee can doll out of the idea, and here she is! 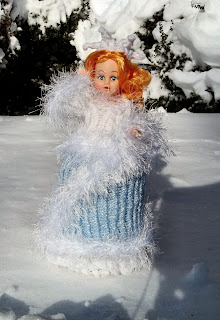 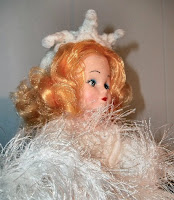 When I took these pictures it was quite windy outside and late in the day, so it was difficult to keep her standing up and not have my shadow fall across her while I took the shot.
Everything has been knit on the various sizes of both the round and flower looms. Her outfit illustrates different kinds of snow at different stages. For example, the large shape of her crown illustrates the large, wet flakes that often fall during the winter.
I raided my stash and found a white yarn that had strands of glittery thread in it, so I used that for her snowflake shaped crown, her blouse, and the scalloped design at the bottom of her dress (which illustrates piles of snow that have been plowed). 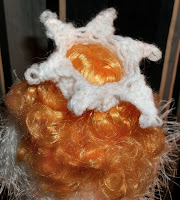 The petticoat under her dress is straight white yarn, which represents snow after it has been packed down and frozen. I used a baby blue baby yarn for the dress, which reminded me of the color of the winter sky. And to illustrate powdery snow spraying up at the bottom of a hill when you sled down it, I used eyelash yarn. The diagonal line of eyelash yarn going down the front of her dress represents the trail that the first sled left as it went down a hill of newly fallen snow. And there you have it! I am still compiling my instructions for knitting the coffee can dolls, and when everything is finished I will be publishing all of the directions in a book. 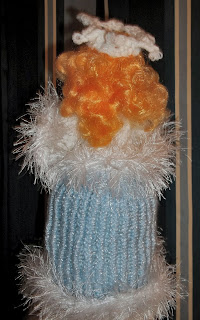